Some Theory that will Help 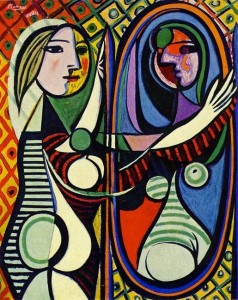 It is useful to think about the origins of this behaviour in terms of what is called projection and one of its counterparts “splitting”. Both ‘splitting’ and ‘projection’ were named and explained by Psychodynamic thinker Melanie Klein.

She said that the mother or care giver is, in the mind of the infant, ‘split’ into two.  For clarity let’s call the splits ‘parent A’ and ‘parent B’. Parent A is the one that fulfils her desires.  Parent A holds her, feeds her, keeps her warm. This parent gives rise to feelings of ‘fulfilment’ and ‘satisfaction’ and ‘safety’.  At a basic level these could be seen as the first feelings that are associated with what Klein recognised as ‘love and understanding’. Not thoughts, but, at this stage, feelings. As such they are sense-based and entwined with any ‘thoughts’. Parent A is everything that is good. The ideal parent or carer.  This parent is experienced by the infant as responsive.  The child is able to command this parent, to take charge of her. To get her needs

met. This mother(parent A) is always there and available only for her.

The other, parent B, is the one that denies her needs.  It is important to remember that the baby does not know at this stage whether the mother or care give is or is not in the room.  The baby has no way of recognising that the mother is actually physically absent or elsewhere. Instead the baby experiences this absent  mother as ‘withholding’, as denying the baby’s needs. Parent B is the embodiment of all things that are bad.

Parent B is a being that refuses to give the baby what she needs.  In opposition to Parent A, this parent is not responsive; the baby does not have the feelings of being able to affect this being. This mother who literally isn’t there, is experienced as one that inspires feelings of helplessness.  The screams for attention are screams of terror thrown out of the baby towards the mother to which they do not get a response.  It is thought that these are the first feelings of hatred and anger and along with those feelings come feelings of revenge.  The baby ‘splits’ these negative feelings from itself and ‘projects’ them into Parent B.

Of course, Parent A and Parent B are the same parent.

The baby has ‘split’ the mother into good and bad.  This ‘splitting’ is a natural part of a child’s (you, me, the pupils you face, President Obama etc) development.

This ‘splitting’ of feelings and people into “good” and “bad” is termed the ‘paranoid schizoid’ position and it remains with us all of our lives.  It is thinking that is dominated by ‘projections’.  In other words, other people become the targets for what the infant, or later on, the adolescent e.g THE PUPIL and later on the adult, is or isn’t getting.  These targets – in our case TEACHERS – are thought to be the ones ‘to blame’ for the anxieties that exist in the pupils in the same way the baby blames the mother for not being present whenever she needs to feed or be held or be kept warm.

What is useful to understand is that the development of this binary thinking (good, bad, right, wrong) begins from the off; the earliest days, weeks and months of our existence. More important to understand is that the act of actually ‘thinking’ when one is caught up in this position, a position brought on by a perceived threat to our survival, is limited.  Anxiety becomes overwhelmingly high and we are trapped in a world of projections.

As the infant develops she manages, if she has what Winnicott called a ‘good enough’ environment, to bring together the ‘splits’.  The two sides of the perception of the mother come together.  She is slowly understood be the same person.  This requires the infant to develop a more complex idea of the mother.  She is neither one thing nor the other, neither all good nor all bad.  Instead she exists in both realms. The anxieties can be tolerated; some of the responsibility for those anxieties can be shouldered by the developing child. The feelings of revenge can be withdrawn and the projections can be, to some extent, removed.

This more sympathetic position is called “the depressive position” and within this position anxiety is experienced as manageable, there is space for new experiences, in other words – for learning.  It is not that anxiety miraculously goes away but that it is can be ‘contained’ and managed. It becomes the fuel that ignites learning and relationships and ‘reverie’ rather than the ticking time bomb that will detonate and destroy everyone at any moment.

It is this ability, first developed in us as children, as infants, as babies that becomes the basis for all complex thinking – what Bion, rather grandly, called his ‘theory of thinking’ – the beginnings of the capacity to learn.

Anxiety is an “unwanted” emotion.  We do what we can to get rid of it.  We find it difficult to tolerate.  Yet, one of the keys to successfully applying these ideas to our classroom practice is that we understand that tolerate it we must.  However, if the anxiety is ‘made available for thought’, then it will not be experienced as life threatening.  It will step out of the unconscious, be divorced from those life threatening survival impulses and be seen for what it truly is, the spur for learning, the drive towards curiosity, the prerequisite of that magical ‘reverie’ of teaching a class where everyone in the room is ‘up for it’, where the topic becomes part of something much more significant, where the connection to the basic drives to survive can be felt in the text of a science book or the new tense of a language lesson or the endless list of ‘descriptive techniques’ in an English lesson.

If anxiety is really understood and seen and named and divorced from the threats of the infant inside us all it can then reconnect to the drive as ‘food’ and ‘warmth’ and ‘being held’. Learning can then be understood to be part of the natural desire of our deepest self.  It is what we and they want.  It is fundamental to who and what we are as humans.

Next: Making Sense of Emotions (IV) Your role in the mind of the pupil